Finishing Tamiyas Challenger I as a First Gulf War tank 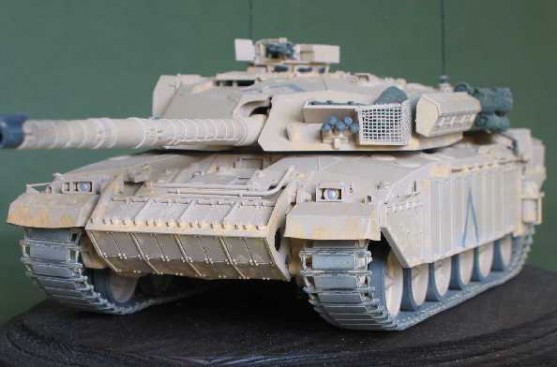 The story of a tank

When I first saw the Tamiya kit of the now famous tank used by the British in the Gulf, I was excited by the sleek look and the uniform color. I immediately knew this was a tank I wanted to build. What I wanted to do was build it straight out of the box but heavily dusted with sand, and there lay the challenge.

When I got the model home and opened it for the first time, I found out that the decal sheet was missing. Naturally I contacted the distributor and asked them to provide me with a new set of the decal sheet. – Yes, of course, they answered, it will take about 3 months to ship it from Japan to Sweden. As I was in no hurry to finish the model and also had plenty of other models to build, I was confident the sheet would finally find its way to my door in a couple of months’ time. Meanwhile I started slowly to build the model.

About a year later I realized I still hadn’t got the decal sheet by my mail, so I made another call to the distributor and asked where my order had gone. The answer this time was that the person I spoke to last time apparently been absent for a long time and my order had been lost during the changing of personnel. –But, of course, we will send a new order to Japan. It will take about 3 months. So I continued my slow building of the kit.

So, what happened this time? Nothing! About seven months later the building of the model was finished and the paint was already airbrushed on to the model, so to be able to proceed, I needed the decals. To my rescue came a Japanese colleague at work, who was to go back to Japan for a week, so I asked him if he could buy the decal set directly from the Tamiya factory from the address provided in the assembly instructions. – No problems! Two weeks later I had it in my hand and could rush home to finish the model.

The construction of the lower hull was basically straightforward following the instructions from A to B. The only difference was in the adding of the side-skirts. For the seam between the side-skirts and the upper hull to be invisible the skirts were glued in place in mid construction prior to painting. But to be able to fit the tracks and wheels at a later stage, the upper and lower parts of the hull remained unglued to each other until the weathering process was completed which was made possible by the way Tamiya fits together its hulls with a slot in the back and poly caps in the front. The frontal add-on armor needed the bolt spacers thickened with plastic card to eliminate the gap between the add-on armor and the lifting hooks just inside the headlights. It was left on the building table until the final moment. The two spare fuel barrels at the back are made up by two halves plus circular sides and the seam between the two halves is right on the top and plainly visible if not treated properly with wet/dry sand paper.

The turret didn’t need much attention except some filling with Milliput in the front right corner. The two big lifting hooks, one on each side of the barrel, received welding lines at the base with Milliput. Great care was spent to sand down the longitudinal seam between the two halves of the barrel so it would be invisible.

I used two different paints for the overall sand color of the tank. I don’t think I intended it from the beginning of the painting process, but because both colors were virtually identical I used both in alternating layers to produce the final finish. The two colors were Model Master Acrylic Sand and Vallejo Model Air Sand Yellow. Of the two paints I liked the Vallejo the best because it is easy to airbrush and doesn’t clog inside the airbrush. Model Master on the other hand dries fast so you can apply more layers quicker, but it also means that it easily starts drying already inside the airbrush. 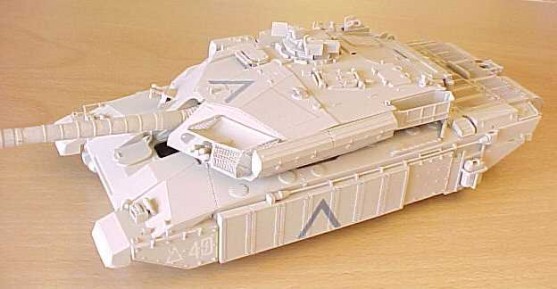 The large chevrons stood out a bit in contrast to the sand color, so they needed to be toned down a bit, receiving a thin layer of sand paint. At the same time the tracks were airbrushed with the same sand color and would later receive black charcoal powder on the big pads on the outside and the areas touched by the rubber wheels.

That left only the tires to be painted plus some minor detail painting. For the tires I used a stick of compressed charcoal that I rubbed against the edge of a knife to produce a fine powder. This powder was then worked into the tire with the help of a hard-tipped color shaper tool which looks like a rubber brush.

Because this is a vehicle which was used in the desert I try to have the usual washes down to a minimum and only apply it on the motor deck.

My goal here was to have a sandy finish, like a sandstorm has just swept over the tank and left quite a lot of sand all over it.

For this task the pigment powder came in handy.

The pigments were bought in an art supply store. 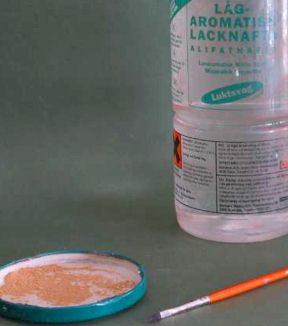 started applying this wet substance all over the tank, but especially in crevices and around the rim of the wheels, making it build up in thick layers.

On the large flat surfaces the result looked just like the powder had been applied with a brush. It looked awful. But with the help of a dry paintbrush it was easily corrected and smoothed out, leaving the sand powder where I wanted it.

One problem with pigment powder and the way I applied it is that it doesn’t contain any binder to make it stick to the paint underneath. The solution was to give the whole tank a final coat of clear flat varnish to seal the pigment. 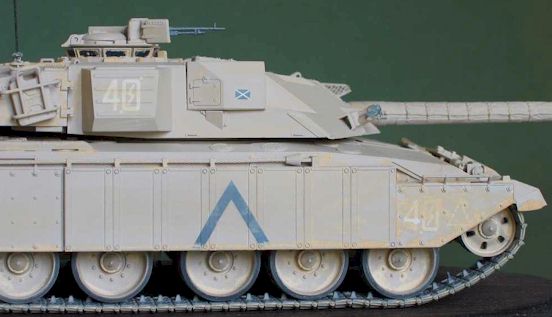 Applying a clear coat is no problem since the pigment powder is very strong in color and does not loose its intensity like pastel chalks often do. 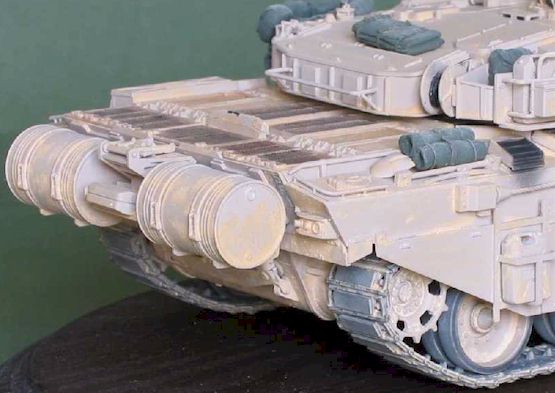 The hard-tipped color shaper tool was also used to apply charcoal powder on the engine vents behind the turret as well as the rubber pads on the track. Finally all the black rubber areas on the wheels and track received a slight dusting of sand.

The colour shapers were used to apply the pigments and char coal powder and a stick of charcoal was used for colouring exhausts and rubber areas.

The only thing remaining was painting of the commander turret’s view-port gloss black, adding two antennas made of 0.5 mm flexible metal wire and adding some crew gear. The Verlinden set Tank Crew Gear fit nicely. They were painted with Humbrol 116 Matt US Dark Green and the straps with Humbrol 155 Matt Olive Drab. Finally they received a dusting of the mixed sand pigment powder to highlight the texture of the cloth and bring it more in tone with the rest of the tank. The drum for telephone cable at the rear of the turret had a soft metal thread painted with Humbrol 33 Matt Black and winded up around the empty drum. 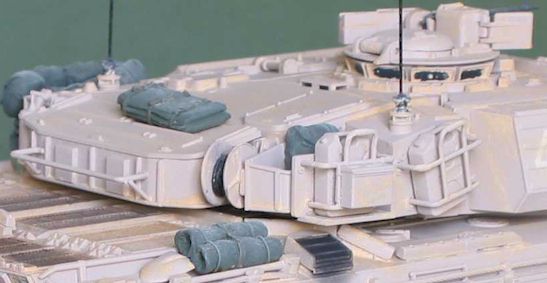 I did not feel like building a complete base in a desert surrounding for this model, but I thought a plaquette would suit my need. And besides, it is good to have something other than the tank itself to grab while handling it. A wood-screw is a simple way to fasten the model to the base and is hardly seen because of the relatively low profile of the tank and its large wheels and side skirts.

All in all I would have to say it was a quite enjoyable project of a kit that almost fell together by itself. Painting one color camouflage tanks means that you don’t have to go through the painstaking process of masking and spraying successive layers of different paint to achieve the final camouflage.

The use of pigment powder instead of pastel chalks grounded to a powder meant a new and interesting technique and the ability to seal in the powder inside a layer of varnish, which means no more danger of getting fingerprints all over the dust or smear it around. 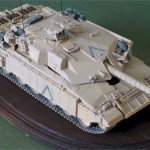 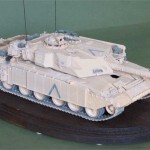 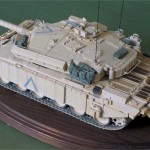 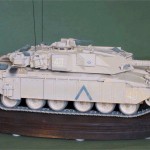