This is a kit I have been eagerly awaiting for a long time. There hadn’t been any

good Beaufighter kits in this scale before High Planes released a series of shot-run Beaus a couple of years ago. However, these kit were a bit rough, and required a good deal of work from the modeller. On the contrary, Hasegawa managed to produce a kit which is easy to build, and features accurate shape and detail.

The breakdown of parts indicates that there are more versions to follow. Hasegawa used to act similarly with most of their previous aircraft kit releases. Nevertheless, the Merlin-engined Mk.II does not appear to be on the upgrade list. Mk.II fans will have to suit themselves with the High Planes kit.

Cockpit interior is fairly basic, which means that your super-detailing skills will not be forgotten. The instrument panel and side consoles are represented by decals, a representation which in my opinion is adequate for the scale. The pilot seat is not very appealing, as it features cushioned seat and back, two things that shouldn’t be there! I’ve chosen to scratchbuild a new seat.

The only external details that are badly represented in the kit are the exhaust stacks. These are supposed to be of the hedgehog type, long pipes with a multitude of small triangular outlets providing for reduced glare in case of night flying. These outlets are omitted altogether in the kit. It is not too difficult to authenticate the kit parts with tiny bits of plastic card, but this job is tedious, as it requires patient handling of many small parts. I have been told that Hasegawa now includes a pair of white metal exhaust stacks with the kit. The reason why the original stacks were just plain tubes is that it was not possible to produce accurate injection moulded hedgehog stacks due to the moulding process. However with the white metal moulding process this can be done.

Different types of wings on Beaufighters can be usually distinguished by the letter following a Mark number. Two types of wings were used. A ”dry” variant with 2 .303 calibre machine guns in the port wing and 4 such guns in the starboard wing, was usually used by Fighter Command and received a designation f. Another ”wet” wing had machine gun bays replaced with extra fuel tanks. This version suited the needs of Coastal Command better, and was designated c.

The external differences between the two types were that the f wing had gun muzzle outlets visible on the leading edge, shell ejection chutes on the underside, and differently drawn panel lines over gun bays. Furthermore, the c wing could be equipped with 4 rocket launch rails under each wing, something that to my best knowledge could not be done with the f wing because the rocket equipment would interfere with shell ejection chutes, thus making it impossible to use the guns.

The wing represented in the Hasegawa kit is based on the f variety, but the modeller is left on his own with the task of drilling out the gun muzzle holes. Eventual conversion to the c-type wing is easy, some filling and rescribing should do the trick.

The above details do not distract from the overall picture – this kit almost falls together. Both the engines and undercarriage are nicely rendered. A small glitch in the instruction sheet: undercarriage part Q16 is appropriate for the later marks of the Beaufighter, use part Q15 instead for a correct Mk.VI.

Kit decals provide option to build two aircraft, both in Dark Earth and Mid Stone camouflage, but with differing undersides – one featuring Azure Blue, another Night Black. The decals are good, but be cautious with Micro Sol.

I, of course, wanted an aircraft in Norwegian squadron markings. A close study of my references left me with an open question. It is well known that the Norwegian Mosquito unit, No. 333 (Norwegian) Squadron RAF used Mk.IIf machines for training duties. This option would require a tedious conversion, something I tried to avoid. However, I have found some pictures from 333 Sqn airfield at Leuchars showing parked Mk. VIs. Whether or not these were used by the 333 Sqn I could not determine. Anyway, I settled for one of these machines (see the photo above), and I feel that this is a closest match for a Norwegian Mk.VI I could get. 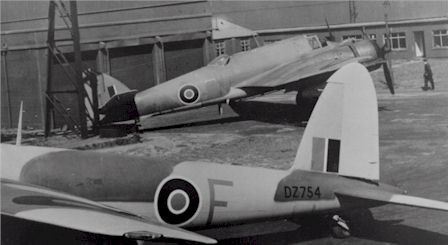 I airbrushed my model in Extra Dark Sea Grey, Dark Slate Grey and Sky camouflage. The roundels came from Hasegawa, but squadron letters and serial numbers were replaced using the Modeldecal sheet.

I definitely enjoyed building this model, and I will certainly buy and build more versions of the kit as they arrive. Finally, I’d like to thank myself for providing the kit for this review!

This article was originally published in IPMS Stockholm Magazine in November 1998.