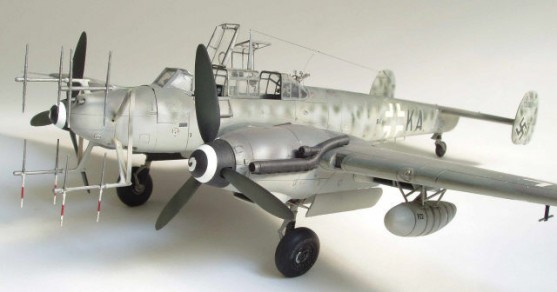 A nice but somewhat old model from my display cabinet… 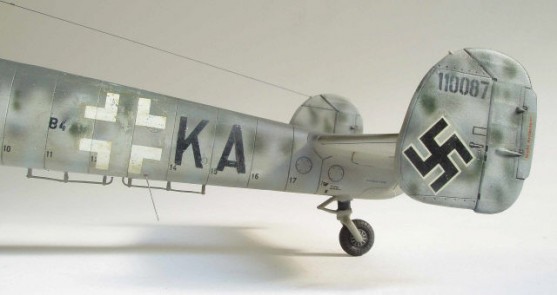 …upon closer inspection sadly displays decal ageing problems. Note the visible decal film around the swastika on the fin. It wasn’t there when the model was new! 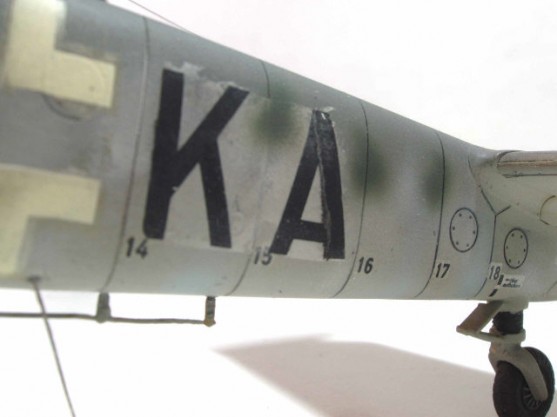 A view from slightly different angle reveals just how bad the decals have become. Once again, these decals looked perfect when first applied; all the silvering is a result of ageing. I hate to see this happening to my models!

The majority of modellers have their pride and joy displayed where it can be seen, preferably in a glass case or cabinet. Old models may take a backstage position because building techniques have improved, a new and better kit has been out in the market and most of all, the models age. Aging models show their wear through missing parts, dust, yellowing decals, fading paint and most of all, conspicuous decals. In the course of time, the decals become brittle and the supporting and once transparent film is prominently manifested in what is commonly called the silvering effect. Some decals may peel in places, particularly if they were not well attached to the painted surface from the beginning.

Within the environment of modelling there are several factors that influence how decals on the model will appear in time:

Recently I discovered a way to revive decals and have them firmly attached both on the newly finished and more importantly, also old models.

It all began with a misunderstanding. For many years I had been conned by hardware store seller, purchasing what I thought was thinner #21 commonly known as nitro thinner but actually getting thinner #18 for enamel paints. After discovering this and obtaining a bottle of genuine nitro thinner, I experimented with it… and came with some surprising results. Upon brush application of nitro thinner on to a finished surface of a model the decals would dissolve regardless of the kind and amount of coating that had been sprayed on top of the decals during the final stages of model building. The dissolved decals would then set in and all silvering effects disappeared leaving a revived and a fine looking model.

The significance of this ”discovery” is that the effects of the nitro thinner are specific to the decals. Applied in strictly limited amount, the thinner does not visibly affect paint or finishing coats, although a heavier application may damage the paint coat. It is very much like biological warfare where foreign agents are introduced to a native ecological system and attack specific components without affecting the dynamics of the hosting system!

Fortunately, the application of nitro thinner can eliminate the trepidation and helplessness that proceeds decal application. To ensure that you get the best results, I compiled the following procedure for thinner application:

In all, the results will depend much on the amount of patience that you muster. The photos in this article show two examples of the ProModeler’s excellent Bf 110G-4. I completed these models 5 and 10 years ago. The decals were particularly thick and brittle and I had to hand-paint the sharkmouth design on the nose of one aircraft to compensate for the lack of decal flexibility. 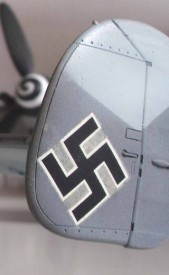 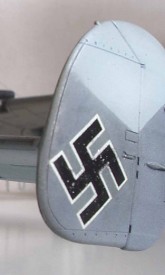 Two views of the same decal before and after the nitro thinner treatment on the decals. Note how the bad silvering completely disappeared ! 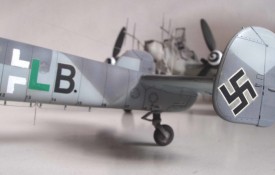 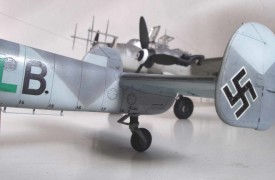 Nowadays, I would apply a nitro thinner coat also to newly-applied decals, after the decal softeners dried. It would blend the curved outlines to the model surface in no time. Contrary to some decal setting solutions, the nitro thinner will force the new decals to snuggle around impossible curvatures and will reveal all the recessed lines and rivets beneath them.

However, be aware that this medium is brutal and can easily damage the soft decals irreversibly. So, be careful. 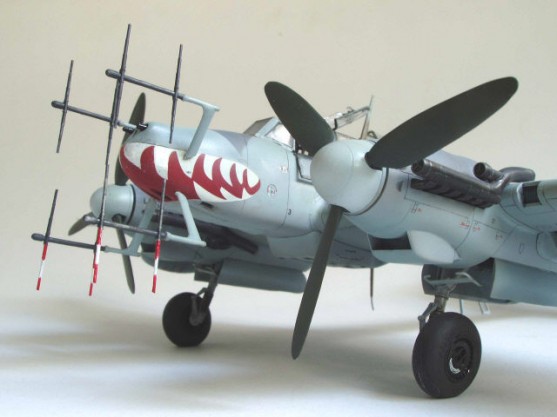 The sharkmouth on this model was hand-painted. At the time I wouldn’t dare to apply decal to such a compound surface, but I wouldn’t hesitate do it now – with the help of the nitro thinner.

If you further examine the photographs at the bottom of this article, you could notice that I took a great effort in the past to attach the decals, such as the application of glossy surfaces, new paint coats, cutting off decal edges. With hindsight, most of these tricks were to no avail. The new treatment resolves these problems in a matter of minutes. I deliberately left out imperfections on the shown models to demonstrate that it you do half a job, it still looks much better. In addition, I made an effort to photograph the models in the least flattering light to show that you would need to twist the model (or walk around it) extensively to find the fine line that separates between the model and its decals.

In all, the application of nitro thinner opens up new ways to model finishing.