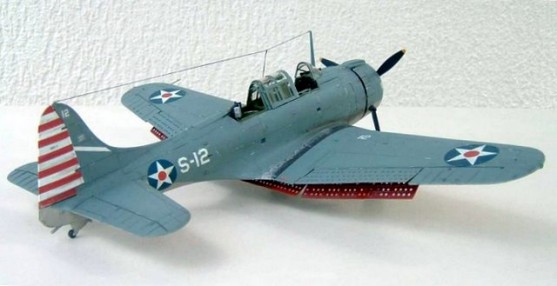 Here is my 1/48 Douglas SBD-3 Dauntless, built in the markings of USS Lexington from the Battle of the Coral Sea, May 1942.

I have previously read some articles about the quality and good detailing of the Accurate Miniatures’ models, but also about their being rather difficult builds, so I was curious to pit myself against this Dauntless.

In the meantime, I kept learning to use my new airbrush – a cheap double-action device produced by Mecafer. And it didn’t seem easy: pressure, thinning, distance, movement … a lot of experimenting was done on scrap plastic sheets.

Opening the box held a positive surprise – plenty of sprues and parts, a sheet about the historical background (including the orders of the day!). The instruction sheet was also unusual, with one step per page explained by a drawing and a very long explanatory text, discussing the meanders of the building complexity. The sheet states that it is ”very important to pay close attention to the instructions” … and it’s true! 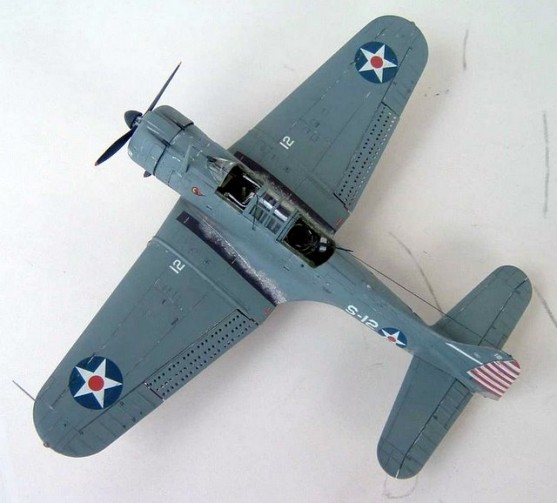 No being entirely confident about my new airbrush, I decided to brush-paint all the interiors and details, restraingin airbrushing to external surfaces only.

The cockpit turned out to be a small model in its own right – about 50 parts, each one very sharp and detailed. It deserves a lot of care for the building and painting. I finished mine with a wash and a some silver drybrushing. Here again, I left the decals on their support for the seat belts, to avoid the glued-on appearance of the decals. I thought the the result was satisfactory. 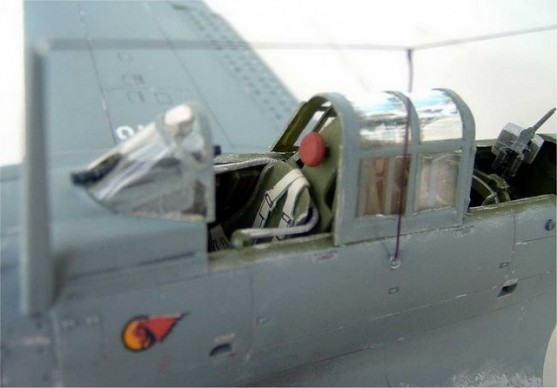 The fuselage and wings were assembled next. The engine, painted in steel colour followed by a black wash, was set in its cowling. Other sub-elements were built and painted: landing gear, bombs, propeller. Most of the subassemblies were left aside until the camouflage painting was completed.

The masks for painting were made out of paper cut to the right shape and attached to the model with Blu-Tack. The moment of truth arrived when I filled the airbrush with paint – see the colour list below. I used Humbrol enamels thinned with White Spirit and I was rather happy with the result.

When the paint was thoroughly dry, the various subassemblies were are attached. The adjustment of the dive flaps and bomb crutch was quite difficult. 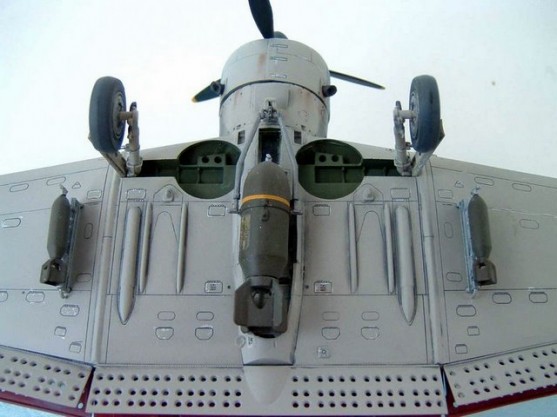 Next, I airbrushed a coat of Klir prior to decaling. Unfortunately, the clear coat proved to be too thin to avoid decal silvering.

After decaling, the weathering was done with a dark grey wash and a silver pencil for chipping. I still think I was not subtle enough!. Exhaust stains and oil leaks were added with pastels.

A flat coat (Tamiya clear + flat base thinned with alcohol) was airbrushed as the final step. It must be remembered that the flat coat partially blows the pastels and the varnish reduces the contrast of weathering effects. Next time, I will have to exaggerate the weathering a bit more.

Thus the Accurate Miniatures Dautnless proved to be a bit complicated, mainly because of the number of parts, often little or fragile. Otherwise, built directly out of the box, the result is amazing and gives a very detailed impression. Despite its price, it’s a beautiful kit far away from the ”Tamigawa” philosophy.

This article was first published at the High and Low Kits site. (Ed.) 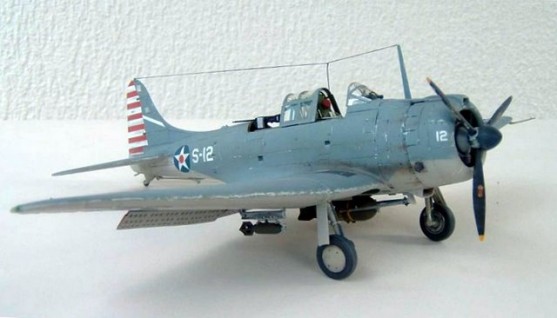 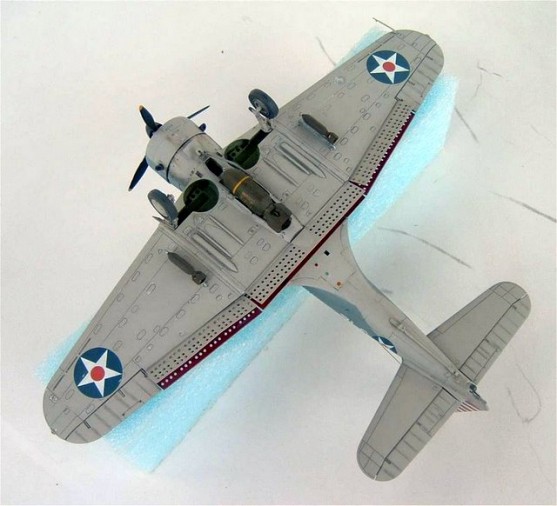 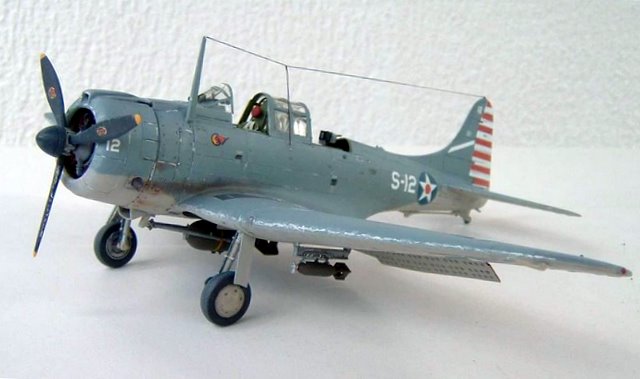 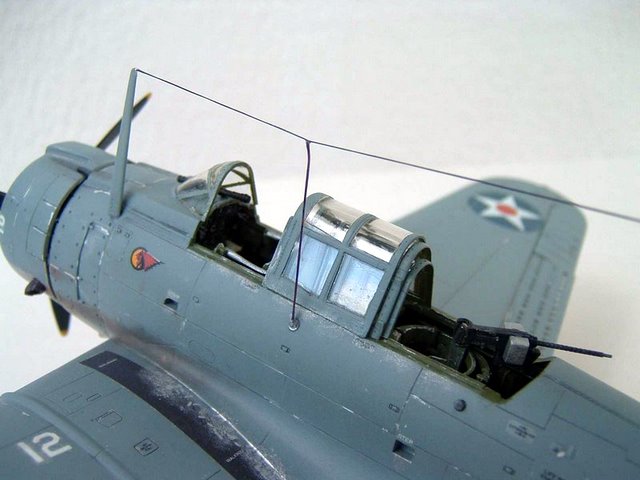 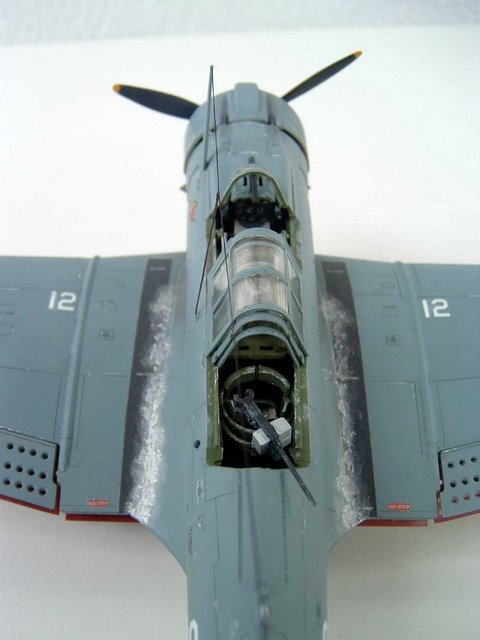 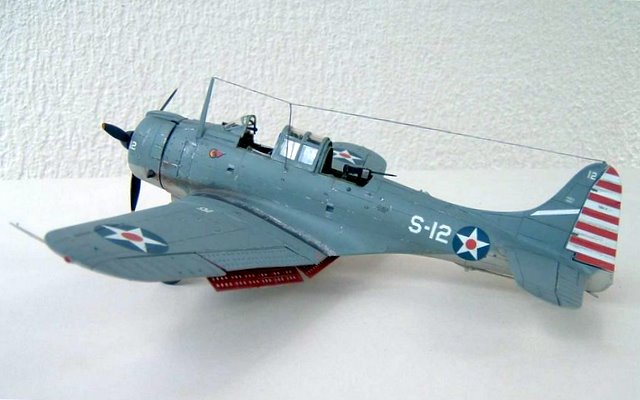 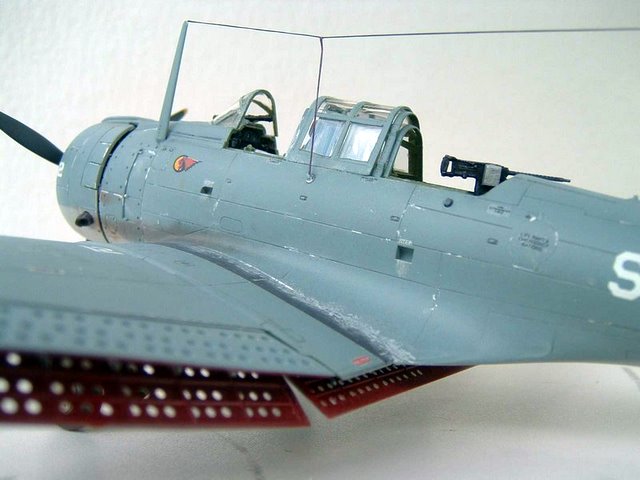