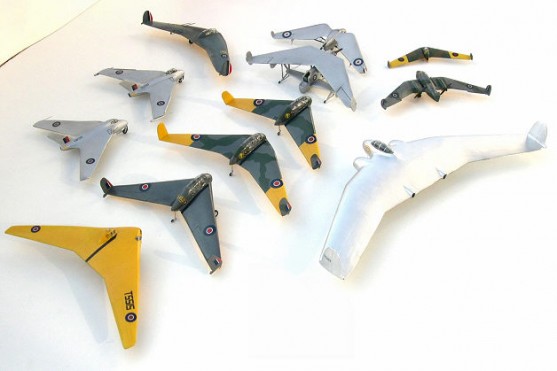 I always wanted to have some experimental aircraft in my RAF collection.

Last year I had the chance to obtain the following book: British Prototype Aircraft by Ray Sturtivant. It is this book that allowed me to learn about some of the most interesting experimental aircraft in the RAF history, those in the series of tailless and canard configuration experiments. The interest for such airframes was closely related to the quest for more speed and less drag. During the 1930s and 1940s, corresponding research was also held in Germany by Horten brothers and Prof. Lippisch.

The book together with the invaluable help given by my friend Jonathan Davies who has sent me some very informative articles published in the Aeroplane Monthly magazine from 1973 to 1980 was a starting point for the extensive research put into the series of 15 models of all British tailless experimental types which which were designed and flown between 1935 and 1947. Here is the list of the models.

Once I was well into the research stage I realized that it was going to be awfully hard for me to obtain the 1/72 kits for any of these aircraft. To my disappointment, not even one of the aforementioned aircraft was available in injection-moulded plastic. So I redoubled my bet and went about looking for vacuum and resin kits.

In the end I had located and obtained the following kits.

When I though that I had exhausted all the options I was lucky to find the Baynes Bat – a kit n injected plastic from JACH! 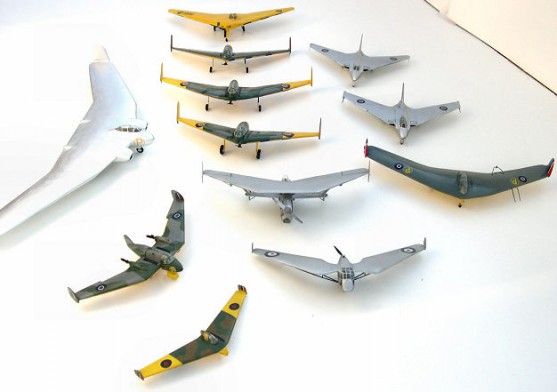 Westland was a very innovative company and during the years before World War II, a number of exciting designs were flown, including the Pterodactyl flying-wing aircraft, controlled by all-movable wingtips. 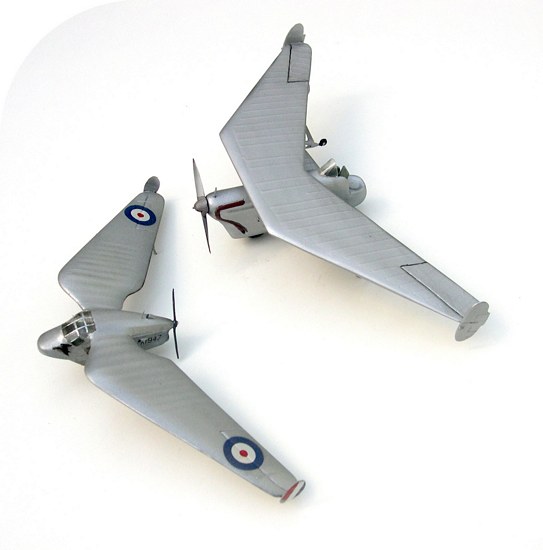 It was a common work for a vacuum form kit. I only had to make the corresponding decals.

Except for the vacuum form wing the rest was done from scratch. The hardest part was the fuselage, I used balsa wood for it covered with a layer of putty and sanded smooth. The rigging wires were made from stretched sprue. 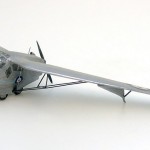 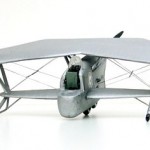 Between 1941 and 1944, Miles Aircraft pursued the concept of tandem-wing aircraft, which resulted in development of the M.35 and M.39 Libellula. 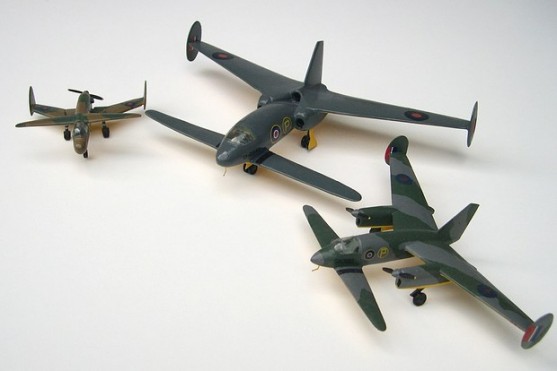 It was quite easy for me to make the Miles M35 and the Miles M39B as both of them were issued as resin kits.

I also took the liberty to build the M39A, a ship-borne bomber project which never got to fly. This model was made from scratch, based on a 3-view drawing that I had found in an old magazine. The basic structure of this model was carved from balsa wood. The surface of the wooden parts was then soaked in cyanoacrylate glue to make it stronger. Then the surfaces were puttied and sanded with a 400-grit sandpaper, several times until obtaining a good finish for the paint coat. 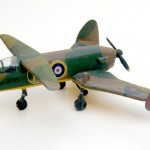 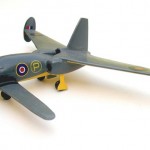 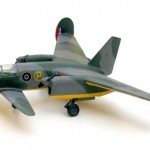 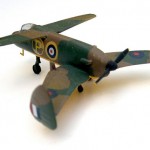 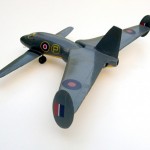 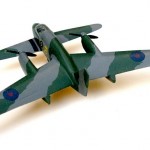 Starting in 1943, GAL designed and built a series of four tailless research gliders. Originally there were to be six aircraft of the GAL 56 series, with different wing angles and control configurations, but in the end only three were made and flown, the first in November 1944. 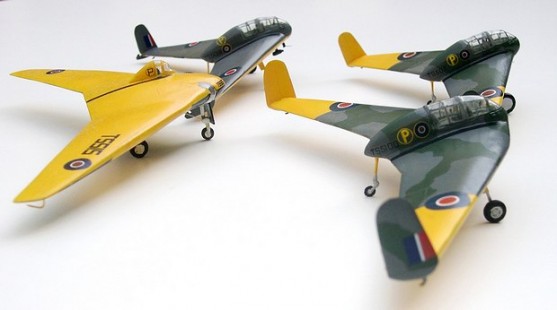 One big problem with this type is that I wasn’t able to obtain a 3-view drawing of the aforementioned gliders, so I had to go after the available data such as span, length, height and wing angles. Since the three fuselages were similar, I made only one mould and produced three castings in polyurethane resin. Similarly I have vacuum-formed canopies for these models.

This one was build from a resin kit. 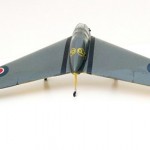 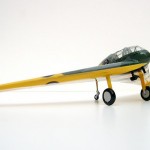 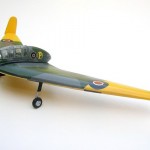 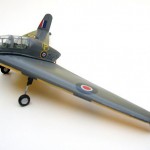 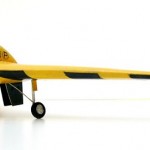 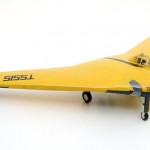 The elegant de Havilland DH 108 was built to a E.18/45 to investigate the behaviour of swept wings at low, medium and high subsonic speeds. The three prototypes built between October 1945 and July 1947 differed significantly in wing sweep and fuselage shape. The third, VW120, became the first British aircraft to break the sound barrier. 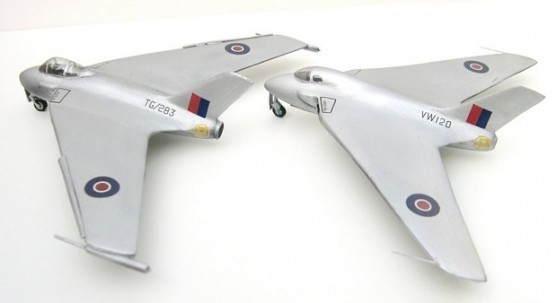 Although there have been three different prototypes of this type, I have built only two of them. My choice fell on the first and the third prototype because they differed in both the fuselages and the wings. I used the Maintrack PX vacuum-formed kit for the TG283.

I took the advantage that the Maintrack kit included the extra fuselage. This was duly assembled with some ”minor” modifications for the VW120 such as addition of the pointed nose and the turtleback behind the canopy. The new ”supersonic” wing was cut from balsa wood. 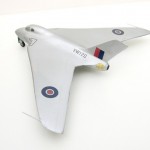 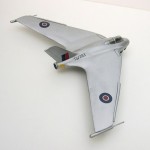 The Flying Wing from Armstrong Whitworth

Armstrong Whitworth was involved in cutting-edge research on laminar-flow wing and general drag reduction. Keen to put its experience to practical application, the company sought contract for development of a jet-powered four-engined laminar-flow flying-wing bomber. Two prototypes were eventually to be constructed and flown under the designation as AW52, but the design was first evaluated through the use of a 1/3 scale glider, which became AW52G. 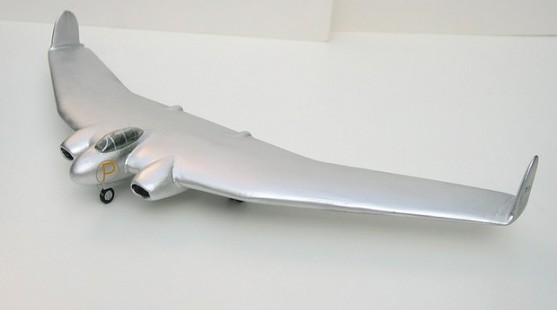 Finally I had to produce the two models of the AW52 and the AW52G from scratch. The construction method was very similar to the one that I had used it with the M39A. In the preliminary construction stage for the AW52 I received some help from Luis Murua, a friend of mine who lives in Córdoba. 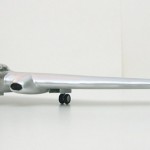 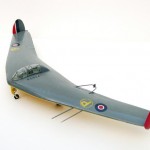 The Baynes Bat was a one-third scale model of a proposed Carrier Wing, comprising a set of wings to be attached to a… tank to permit it to be towed as a glider. Designed by L E Baynes, one prototype was built by Slingsby Sailplanes. Needles to say the full-scale idea never materialised. 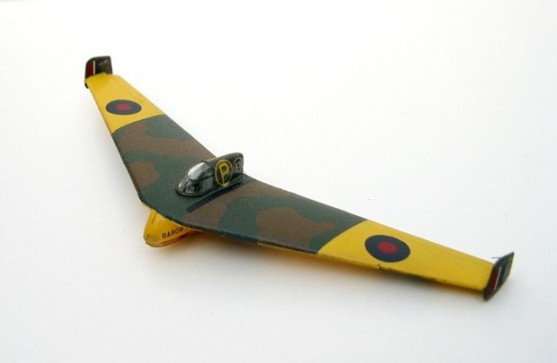 As mentioned before, this was the only injection-moulded kit used in this project, produced in recent years by Czech company Jach. A really easy build compared to everything else presented in this article.

Last in this presentation, the Handley Page H.P. 75 Manx was a purely experimental tailless aircraft of pusher configuration. The partially-swept wings supported the vertical stabilizers of a twin tail, with elevons for pitch and roll control. 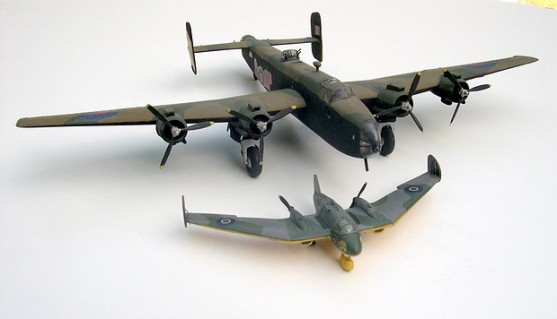 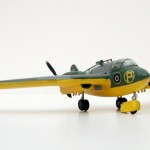 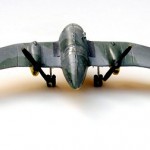 Because the M39A was only a project and was no made to fly I made up the scheme and the colors to paint the model, but for the other models I have already gotten the information regarding the scheme, colors and marks.

Having carried through this collection of tailless and canard experimental types was very rewarding to me. It is my own way to show the level of development, the search of new ways for flying and the courageous pilots who flew those machines without any help from computer systems which dominate aviation development today.

It is also a way to remember that self-confident brotherhood who dared looking for the new horizons.